Hodgkin Lymphoma’s Survival Rate: What to Know About This Disease

Named after Sir Thomas Hodgkin, the British doctor who discovered the disease, Hodgkin lymphoma is considered a highly “curable” cancer. As far back as the mid-20th century, researchers discovered that the condition responded well to radiation therapy. Chemotherapy medications were shown to cure Hodgkin lymphoma in the 1970’s, and the combination of chemotherapy and radiation therapy have shown even greater success.

Of course, not everyone’s experience with the disease is the same. To better understand how this disease is treated, it helps to know more about its effects on the body.

What Is Hodgkin Lymphoma?

“These cells are a part of the lymphatic system, which is part of the immune system that helps the body fight off infections,” said Dr. Paul A. “Tony” DeCarolis, board-certified medical oncologist and hematologist with Rocky Mountain Cancer Centers (RMCC). “In Hodgkin lymphoma, some lymphocytes turn into large, abnormal cancer cells called Reed-Sternberg cells.”

Hodgkin lymphoma can start anywhere in the tissue of the lymphatic system. However, it usually originates in one of the lymph nodes. Lymph nodes exist throughout the body, including the armpits, neck, chest, abdomen, and groin. They are connected by lymph vessels, small tubes that carry lymph fluid (immune cells in a clear fluid) around the body.

“Hodgkin lymphoma cancer cells often move in a predictable pattern, from lymph node to lymph node, which is one reason this disease may be easier to treat than other forms of cancer,” Dr. DeCarolis said.

Who Gets Hodgkin Lymphoma?

Certain risk factors may make you more likely to get Hodgkin lymphoma, but not everyone who has these risk factors will develop the disease – and many people who don’t have any risk factors still get it. Hodgkin lymphoma affects people of all ages, however, it is most frequently diagnosed in teens and young adults in their 20s. Risk also increases later in life, after age 55.

Having an autoimmune disorder, such as lupus, celiac disease, Sjogren disease, rheumatoid arthritis, HIV, or another immune system-related disease may increase risk slightly.

How Do You Know If You Have Hodgkin Lymphoma?

Unlike some types of cancer, there are no screening tests available for Hodgkin lymphoma. Knowing and paying attention to the possible signs and symptoms may help your doctor find it at an early stage.

The most common symptom is a swollen lump – usually a lymph node – in the neck, armpit, or groin caused by an enlarged lymph node. Typically, these swollen lymph nodes do not hurt. They may get larger over time, or you may notice another lump nearby or in another part of the body.

Lymph nodes may also be enlarged for other reasons, such as an infection, but in these cases, the lymph node usually shrinks back to normal size once the infection is gone.

It’s always a good idea to be seen by a medical provider if you notice an enlarged lymph node, especially if you have not had a recent infection.

Other symptoms of Hodgkin lymphoma are often systemic, meaning they impact the entire body. Symptoms may mimic those of the flu, a cold, or even another noncancerous systemic condition. If you have one or more of the following symptoms, it’s time to talk with your physician to find the cause:

How Is Hodgkin Lymphoma Detected and Diagnosed?

The first step to detecting Hodgkin lymphoma is a physical exam. Your provider will ask about your medical history and examine any lumps you have noticed. They may also feel other lymph nodes and press your abdomen to feel your spleen or other organs.

If they find that you have an enlarged lymph node, they will likely check to see if you have an infection first, usually by ordering blood tests. 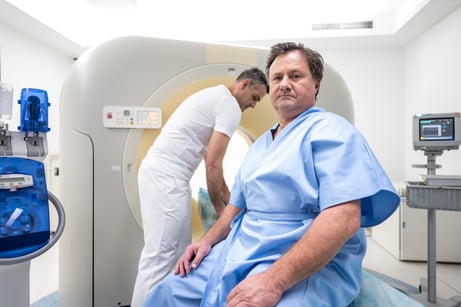 The provider may also order a biopsy, or tissue sample, of your lymph node if they suspect Hodgkin lymphoma. The biopsy may be collected using a needle or require removal of the lymph node.

To get more information about enlarged lymph nodes or organs, your doctor may order imaging tests, including X-rays, CT scans, or positron emission tomography (PET) scans.

“It is essential to see your provider as soon as you notice unusual symptoms,” Dr. DeCarolis said. “Your chances of survival are higher the earlier Hodgkin lymphoma is diagnosed.”

How Is Hodgkin Lymphoma Treated?

Over 80% of Hodgkin lymphomas can be cured with treatment, the ACS reports. Those treatments often include chemotherapy, radiation therapy, immunotherapy, targeted therapy, or some combination.

Different types of Hodgkin lymphoma grow and spread throughout the body at different speeds (or rates). Treatment options depend on the type of Hodgkin lymphoma, the growth rate, and whether it has spread in the body. Options may also vary based on your personal medical history and any existing medical conditions.

Your care team will run tests after you are diagnosed to determine the stage of cancer (or how much cancer has spread in the body). Cancer is staged (or rated) on a scale of I to IV ( or 1 to 4). The lower the number, the less cancer has spread. Generally, your doctor stages cancer based on bone marrow biopsy and imaging test results.

“Before a treatment decision is made we often involve a multi-disciplinary team of medical and radiation oncologists to evaluate and make recommendations for the best treatment options available,” Dr. DeCarolis said. “Additionally, you may be eligible for clinical trials looking into newer, hopefully even better treatments.”

Hodgkin lymphoma can recur after initial treatment. In those cases, your doctor may recommend additional treatments such as a bone marrow or stem cell transplant, newer immune based therapies, or clinical trials. Hodgkin lymphoma survivors are at an increased risk of complications following successful treatment and need long term monitoring for second cancers that may develop due to the chemotherapy and radiation used to treat the original disease, as well as long term risk of heart or lung disease.

It’s a good idea to continue following up with your oncologist if you have survived Hodgkin lymphoma to protect yourself as much as possible from these second cancers. Exercising, avoiding alcohol, eating a healthy diet, and maintaining a healthy weight may help you prevent another form of cancer.

At Rocky Mountain Cancer Centers, we are committed to providing you with exceptional care while offering the latest in treatment options. Learn more about our expert lymphoma care, or find a location near you to request an appointment with one of our lymphoma specialists.